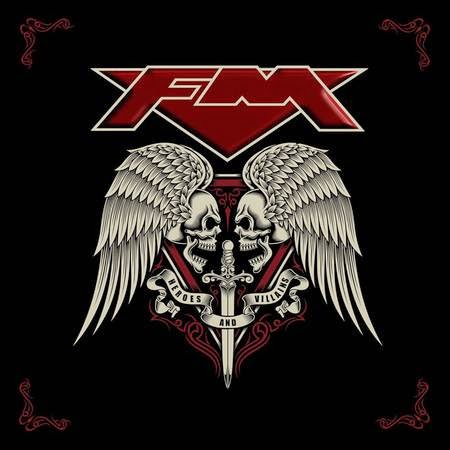 Genre - Melodic Rock / AOR
Track listing:
01. Digging Up The Dirt
02. You’re The Best Thing About Me
03. Life Is A Highway
04. Fire And Rain
05. Incredible
06. Call On Me
07. Cold Hearted
08. Shape I’m In
09. Big Brother
10. Somedays I Only Wanna Rock And Roll
11. I Want You
12. Walking With Angels
Perhaps the most important British Melodic Rock / AOR act of all time, FM may have spent last autumn on a 30th anniversary tour, but they are neither a nostalgia band nor one to let the grass grow under their feet. Two years after a pair of new albums in Rockville I and II, and ahead of yet another tour, they are back with another record of new material entitled "Heroes And Villains".
Simply put, "Heroes And Villains" is probably the most overtly commercial of the albums they have recorded since reforming, possibly even since the outstanding 1989’s ‘Tough It Out’.
Opener "Digging Up The Dirt" has a shuffling groove to it driven by a great big guitar riff underpinning the track courtesy of Jim Kirkpatrick whose guitar work on everything from Metropolis to date has been phenomenal.
Steve Overland’s vocals need no comment other than to say that the smoothest set of pipes in melodic rock sound as strong as ever allowing the listener to settle into the mood of the album within the first 30 seconds.
All the trademark FM styles are there. Merv Goldsworthy and Pete Jupp make everything sound big, while Jem Davis’ keyboard sound is fresh and modern.

The ultra-catchy follower "You’re The Best Thing About Me" can be compared with Def Leppard-Hysteria era, although Steve Overland’s ever superb lead vocals are vastly superior. Later, the lush ballad "Incredible" is another showcase for the warmth and emotion the frontman brings to his singing.
"Life Is A Highway" sneaks a little bit of American Girls from FM's brilliant debut into the mix just to keep the long term fans happy. "Fire And Rain" brings in a classic melodic rock groove with some 'whoah oahs' thrown in for good measure at the beginning of the track.
Commerciality should not be equated with fluffy keyboards though as the guitar of Jim Kirkpatrick is pushed well forward in the mix and his concise solos suit the music perfectly.
Much of the album has the feel, if not the budget, of a Mutt Lange-produced album and indeed "Shape I’m In" could be a missing outtake from Bryan Adams’ ‘Waking Up The Neighbours’.
"Cold Hearted" is virtually the only representative of the more melodic bluesy sound of early Nineties FM, adding a touch of grit to the highly polished fare elsewhere like the bright and breezy "Call On Me".
"Big Brother" offers something different both lyrically and with its slower pace and haunting keyboards at the beginning and end, and "Sometimes I Only Wanna Rock n Roll" has the raunchy Seventies feel of Brishish scene.
Now of course, no FM album is complete without the ballads. There are tracks littered throughout FM’s history that other bigger AOR acts would have loved to have written and the aforementioned "Incredible" ticks all of the boxes that denotes a future fan favourite as well.
They save the best for last though and the album plays out with "Walking With Angels", opening with soft acoustic guitar playing, beautiful harmonising from the band and Steve doing, well, simply what Steve does best. This song deserves to be huge and may be one of the best tracks the band have ever written.
Well it's 2015 and here we are gearing up for a new FM album, and sometimes you just gotta love the music world, because during their initial period of rocking all over the world and after the wilderness years of 1996 - 2007, it is amazing that the band continue to release great music.
"Heroes And Villains" cements their reputation as the UK’s foremost exponents of Melodic Rock, and delivers, as usual, very polished & slick quality stuff.

Posted by The Sinister Angels realm at 17:51