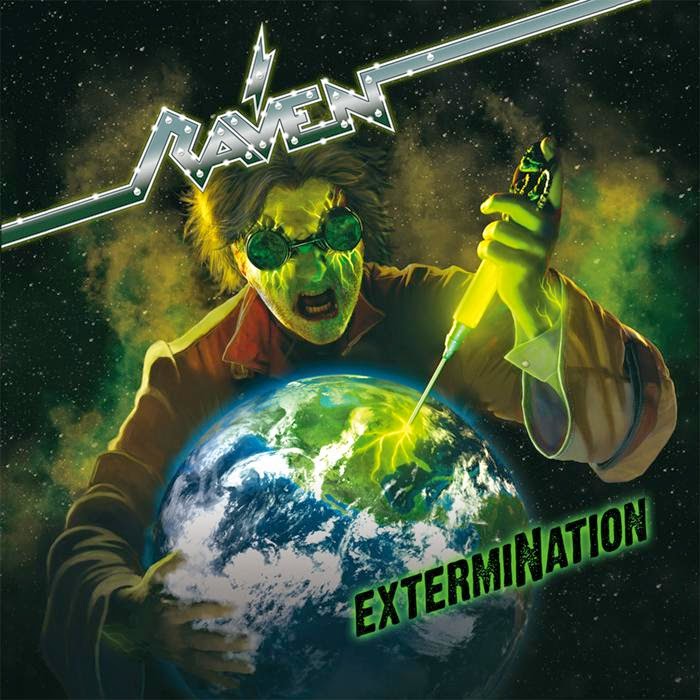 Raven? Now there is a blast from the past!
If by the year 2015 you haven’t heard Raven then it is time to question your Rock credentials. Formed in Newcastle way back in 1974, the band released a triple whammy of cult classic heavy albums Rock Until You Drop, Wiped Out and All for One between 1981 and 1983.
On “ExtermiNation”, they still sound the same, but despite of being an exercise of nostalgia or 'too much old men to rock', the result is fun, fun, fun.
And they are damn fine a their playing, wrapped by a very good recording production.
There are a lot of speed, power and melodic metal bands out there that owe a debt to Raven for paving the way. The band have had one line-up change since 1981 which was in 1987 when drummer Joe Hasselvander (Pentagram, Death Row) joined the band, and they have never compromised their sound. The guys have come a long way since "Don't Need Your Money"!
Raven is traditional heavy metal, at this point, named 'classic rock'.
Yeah, you have pounding drums, screaming guitars and head thumping bass all topped off with John Gallagher’s unmistakable voice.
“ExtermiNation” is the band's 13th studio album and their first in 6 years, in the interim they have relentlessly toured and recently hooked up again with old sparring partners Metallica for some mega-dome shows in South America.
Due the excellent production for this type of music, on “ExtermiNation” Raven sounds younger, fresher, and more merciless than ever. By employing the formula of hooks and fun), the album just feels incredibly energetic and alive.
If there is one thing that Raven never forgets – it’s that all real Rock music begins with a hook to make it great. It takes more than just 'heaviness', though “ExterminNation” has its fair share of that.
Most of all, they always keep it fun with a healthy dose of rock ‘n’ roll. This formula has endured for the last 35 years and has been the basis for some of the most consistently iconic material in the history of heavy metal. Stacked with amazing hits like “All for One,” “Rock Until You Drop,” “Hell Patrol,” “Mind Over Metal” – most bands would have tried to pass off a half-assed album only to rely on the past glory to garner fan forgiveness.
With tracks like "Fight", "Scream", "Thunder Down Under" and "Feeding the Monster" Raven smashes the metal right in your face in the same classic fashion that the band has done in virtually the entire time heavy metal existed – complete with the auditory activated smell of leather, denim, and sweat and the sensory propagated studs to chin that comes with every exhausting live performance.
“One More Day” highlights Mark Gallagher’s guitar prowess with a tapped intro before a big fat juicy riff comes in for the kill. This song contains some great runs with the band sounding tighter than ever; how John Gallagher gets those high pitched screams nowadays is commendable, many of his peers can only squawk at this stage of the game.
The album is a mix of these slower mid paced rib crackers and the faster material which is more akin to their earlier material. Hasslevander puts in a sterling performance throughout with his trademark heavy hitting and solid double bass.
The production in “ExtermiNation” is big and bold with a bucket load of bottom end, but more importantly it is full of songs - classic heavy metal songs, nothing more nothing less.
If I was to aim criticism at this record, it would be the length and for some folk that may prove a turnoff and they may not give the songs all a fair chance. Some bands try to over complicate things, Raven don’t – they do what they have always done – delivered a hammer to the face.
Go buy and find out what real fun heavy metal is!

Posted by The Sinister Angels realm at 17:14