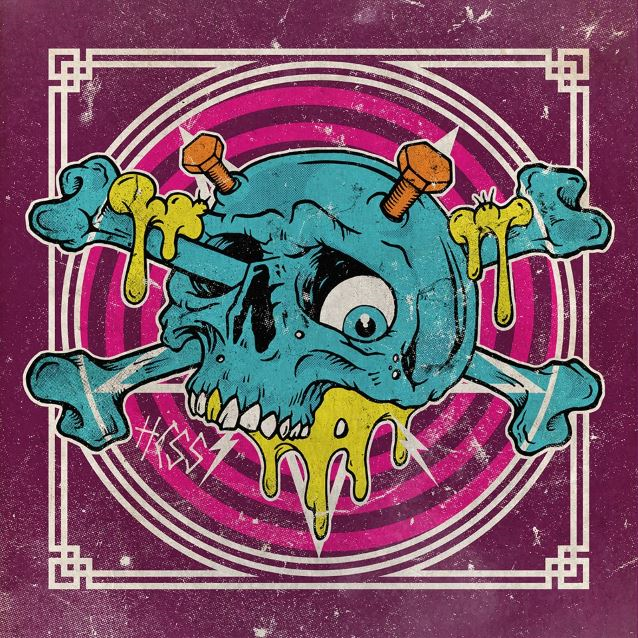 01. Don't Mean Shit
02. Party 'Til I'm Gone
03. The Cemetery
04. Off With Their Heads
05. Fly
06. The Ocean
07. Touch the Sky (feat. Etzia)
08. Growing Old
09. Glue
10. Messed Up for Sure
The fine purveyors of Swedish sleaze hard rock HARDCORE SUPERSTAR are back with their tenth studio album "HCSS".
"HCSS" is a self-confessed return to their roots, with the guys having recently claimed: "We wanted to reinvent ourselves, so we had to go back to the summer of '94 when we first started this band and through that get in contact with the feeling and the vibe that inspired us in the first place.
That same philosophy goes for the whole album — how we approached the recordings, artwork, choice of the right guy to mix the album and so on."
If ever you want to hear a song that properly sums up Hardcore Superstar, give the opener "Party Til I’m Gone" a spin. The stirring riff and hefty chorus tied with glam rock elements make this belter a winner on every level.
Then the classy flamingo guitar intro to "The Cemetery", as you would expect, erupts into a cacophony of mayhem with a typically brash stomping vibe. It has everything that a song with the band should have.
If you listen carefully you can hear how the band tried to go back to the sound they had in the beginning even if it still is the 'newer' sound in front, showing the front teeth.
Should we talk about the album best song and you should listen to "Off With Their Heads". It's a bit quieter but still heavy and has the typical features of what makes Hardcore Superstar just one of Sweden’s best bands. This ass-kicker contains every ingredient that makes up the HCSS formula, brassy lyrics, a throwback '80s chorus hinged with Vic Zino’s melodic guitar tones.
That continues on "Fly", a monumental track that unearths magical memories of Motley Crue’s Home Sweet Home. This song probably won’t be played in 50 years time, but it deserves to be revered today.
For a track that opens with some haunting bass tones from Martin Sandvik and then an excellent guitar riff, "The Ocean" becomes a let down. The feeble verses lead into a sadly lacklustre chorus on a song promising a lot more.
"Touch The Sky" meanwhile promises and wholeheartedly delivers, HCSS don’t just specialise in extroverted sleaze rock, they do the dark and moody stuff with the same results.
And just to completely mess with your minds, they dip their wicks in a bit of prog too. Listening to the intro to "Growing Old", you could be forgiven for thinking you were spinning some classic Emerson, Lake & Palmer. The haunting futuristic keyboards add a real touch of class to a song that compels from the start, and to it’s hell raising finish.
"Glue" is a ready wrapped pressie for riff lovers. The powerhouse of a lick dominates this track with slick precision. This song was released to the public last November and may have got lost in the Christmas market scramble. Hands down the best thing on the album and should be re released when this album hits the stores.
"Messed Up For Sure" closes things out with a bang, an audacious little number containing an interesting interlude that unleashes a mind bending finale.
After the very first listen, "HCSS" is synonymous with everything we associate with Hardcore Superstar.
Sandvik and Andreasson remain the power couple where that driving rhythm is concerned. Zino's dirty, sleazy lead guitar licks are as prevalent as ever on this album while Berg's trademark vocals remain undiminished, yet demonstrative of a range we may not have previously been aware of.
I have to say for a band that has been treading the hard rock boards for over two decades now, and delivering quality music, the guys sound as hungry as ever!

Posted by The Sinister Angels realm at 22:56