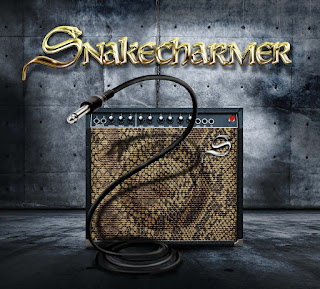 "Six of the UK’s most highly-esteemed and experienced rock musicians have joined forces to create Snakecharmer. Original Whitesnake members Micky Moody and Neil Murray have teamed up with Laurie Wisefield (Wishbone Ash), Harry James (Thunder, Magnum), Adam Wakeman (Ozzy Osbourne) and Chris Ousey (Heartland) to bring you classic twin-guitar based rock as it should be played."
I have to say that I pretty much agree!
With Moody and Murray’s Whitesnake connections, the band toured a little while ago as Monsters Of British Rock, wisely ditching that name for the much improved Snakecharmer, and were initially largely a Whitesnake tribute act, knocking out all the best tunes from the original, and best, era of Whitesnake, before Coverdale shed that classic band in favour of big hair and over production.
With all of the talent on board Snakecharmer inevitably ended recording an album (self-titled) released by Frontiers Records, (something that I wished their previous incarnation as M3 would have done with Tony Martin on vocals!), and let me just say that this is one awesome Classic Hard Rock album full of magic and personality.

Obviously you have an old Whitesnake vibe to some of the tunes here, and that's a good thing when you play bluesy Hard with this class. Sure enough you could imagine Coverdale belting out the likes of "Turn Of The Screw", "Guilty As Charged", "Nothing To Lose" and especially the impressive "Smoking Gun".
It’s not all a ‘snake fest though. Chris Ousey’s vocal style lends itself particularly well to hard AOR, Foreigner-esque tracks like "Accident Prone" and the AOR-tastic "Stand Up".
The absolutley awesome power ballad "Falling Leaves", has that early '80 mysterious atmosphere, and with "To The Rescue" the band goes for a Bad Company style bluesy boogie with charm, same in the the excellent "A Little Rock and Roll", one of the album’s real highlights.
Another great moment is heard in the opening cut "My Angel", combining some ol' Aerosmith guitars with a terrific melodic background instrumentation and jumpin' vocals.


If you are a fan of good traditional bluesey hard rock, (and I am!), then I just can't reconmend this album highly enough.

Posted by The Sinister Angels realm at 21:23