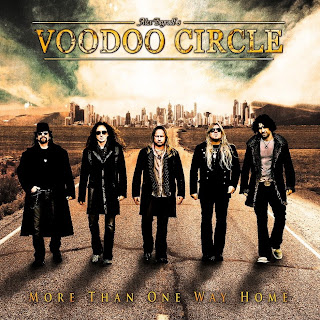 More Than One Way Home is quite possibly the best Whitesnake album that Whitesnake never made! More Than One Way Home is Voodoo Circles third album and could well be a long lost Whitesnake album from the late eighties. The song titles alone paint a picture of the era add to that the fact that vocalist David Readman sounds more like David Coverdale than David Coverdale sounds like David Coverdale these days you really do get the picture!
Opening track "Graveyard City" together with "Bane Of My Existence" have crunchy hard rockn' riffing that introduces a flavour of Dio into the mix, albeit still with that Whitesnake influence. Elsewhere, "The Ghost In Your Heart" does have a bit of Blackmore/Purple vibe to it, but once again it's the eighties incarnation circa ‘Perfect Strangers’ that springs to mind, and in fact sections of this sound dangerously close to that album's title track.
Finally, "Open Your Eyes" and one of the bonuses in this Limited Edition called "Castles Burn" rock out properly with the vibe of classic Rainbow, while the other bonus "Shape Of Things To Come" recalls Black Sabbath Tony Martin era.
The album is finely produced and expertly performed by the talented Alex Beyrodt, David Readman and all the musicians involved.