Helloween - Straight Out Of Hell 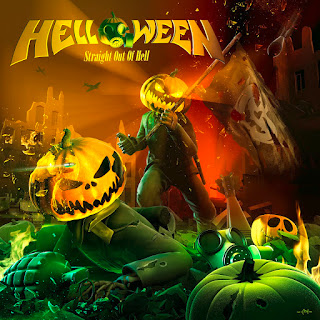 The mighty Helloween return with album fourteen in the form of Straight Out Of Hell, and with it a real return to form!
Straight Out Of Hell has thirteen tracks on the standard release and two extra bonus tracks on the 'Premium Edition' including a Hammond version of "Burning Sun", which is dedicated to the much admired John Lord (Deep Purple) who of course passed away in 2012.
Singer Andi Deris keeps the guys on a melodious track yet allows them to deliver all the technical craft and metal that the band Helloween have become known for over the years.
Highlight tracks for me personally include the almost rapped, Wanna Be God and the great Asshole, but there are plenty more gems on this album such as the melodic Hold Me In Your Arms, the rocking Years, or the pianno inro'd Waiting For Thunder.

Straight Out Of Hell really is a great album, an album that see's Helloween doing what Helloween do best, and delivering their best album since the days of the mighty Keeper Of The Seven Keys albums.


Posted by The Sinister Angels realm at 20:55