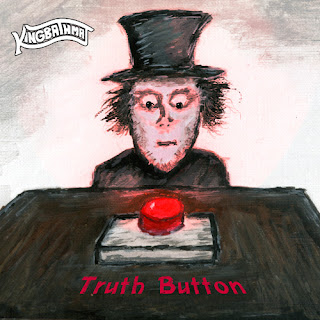 
KingBathmat are a 3 piece progressive / alternative rock band band hailing from Hastings England. Truth Button is their sixth album to date. Coming across as the almost perfect blend of early Black Sabbath and Jellyfish, KingBathmat really could be the natural heirs to the 70's prog rock crown. Magnificent songs, twisting and turning through a labrynth of tempo changes and atmospheric textures. Lush guitar work and some great vocals and harmonies to boot, make Truth Button possibly the best album in this genre that I have listened to in years. featuring only six tracks yet clocking in at a whopping 51 minutes long Truth Button really is an album to sink your teeth into. Despite the length of the tracks they seem to pass by in a flash, never feeling over indulgent or too long, just twisting and turning through their various soundscapes as mentioned earlier. Powerful, quirky, melodic, spacey, stunning, I just cant find enough superlatives to describe this album!

If you are a fan of progressive rock music I really cant reconmend this album enough.

Posted by The Sinister Angels realm at 18:29