Pipes and Pints - Until We Die 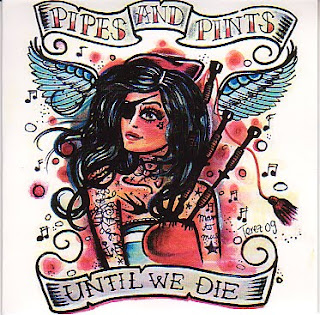 Pipes And Pints were formed in 2006 by Vojta Kalina (Highland Bagpipes/Vocals) with a dream of a band that combines punk rock with dirty folk music such as The Pogues. Soon after, he met Tomas Novotny (Guitar/Vocals, ex-Who ate my Skate) who shared the same dream, flavoured by country and rock and roll.

This album finally saw a release in late 2009 but does it work?

well if I'm honest, ever since Ginger used bagpipes on the Wildhearts song, Give The Girl A Gun, Ive waited to hear someone else have the nerve to try mixing Bagpipes into a rock track, here's a band that do it on every track. Yes it really does work!!

You have all the energy and passion of your better than average punk band with the added pipe elements. The songs are well written and the band are pretty damn tight, the productions just enough to bring out all the best quality's with out ever being too much. I absolutely love the intro track, The Gael, a great instrumental with a rolling drum beat and the bagpipes. Ive listened to this album a few times, more than I expected too to be really honest and I cant really find any faults.

A great band, a unique sound, and some pretty awesome songs. A great combination!