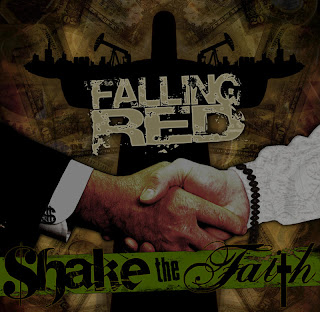 The Cumbrian four piece's debut album comes packed to the brim with the debauchery, guitar hooks and swagger that made Guns N' Roses Appetite For Destruction such a vital and refreshing album!

The band manage to enthuse each and everyone of the eight tracks on this stunning debut album with a raw pure energy that highlights the sheer enthusiasm that is sure to capture the hearts of a new rock generation, and Shake the Faith could still be considered as a ground breaking classic in 10 years time!
Falling Red could be the most important thing to happen to the British music scene since the Wildhearts and NWOBHM!
Tracks like 'How You feel (On Me)', 'Out Of Control', 'Sue You for Your Soul' and title track 'Shake The Faith' and destined to be the anthems of the new generation of rock n rollers!
Its rare that you get to hear sure a stunning debut, I was 13 when Appetite hit the streets, so I pretty missed all the fuss, but Ive got a feeling I'm gonna jump on board for this ride!