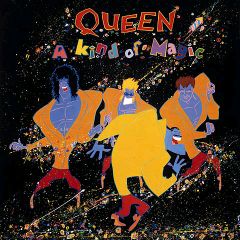 
Hot on the heels of a blistering performance at 1985's Live Aid (a gig that pretty much saved the band from splitting up!) Queen entered the studio to record the soundtrack to one of my favourite films of all time, The Highlander. For some reason, although the music was used in the movie, the soundtrack album was scrapped and the songs re worked into what would be come A Kind Of Magic.
This was to prove to be one of Queens biggest selling albums and tours of all tiume, in fact the last tour to feature the late Freddie, those were magic years!
Featuring 4 huge singles in, One Vision, A Kind Of Magic, Who Wants To Live Forever and Friends Will Be Friends, this album was awesome. Again the remastering is perfect, ensuring the tracks now sound even better!
The bonus material on here is a mixed bag, its great to see the Highlander version of A Kind Of Magic getting an official release, but why not the awesome Highlander version of Princes Of THe Universe?
The demo of A Kind Of Magic is a welcome addition, but would have liked to see more material like this made available, such as the Queen demo of You Are The Only One, ohh well maybe we will get the Queen Anthology released one day (as promised back in 2000!)

A Great album well worth reaquainting yourself with!


Posted by The Sinister Angels realm at 20:24