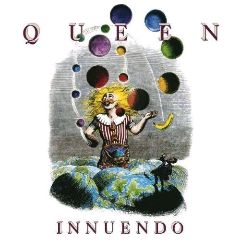 1991, This album suprised the hell out of the nation. Lead single and title track went straight in tio the UK charts at number 1, the album followed a week later, and by god what an album! Spawning another 5 hit singles, Innuendo, Im Going Slightly Mad, Headlong, These Are The days Of Our Lives (which was to be the last promo video Freddie would ever record, where he seems to say goodby to his fans!) and The Show Must Go On.

This was the best album Queen had made in years, pure majesty, Innuendo, epic, Dont try So Hard with freddies vocals so crystal clear and sharp, The Hitman, a pure rocking work out, if Freddie knew he only had months to live he intended to go out on a high, and that he did!

Again the remastering is spot on, and the bonus disc throws up a few nice suprises, such as Ride The Wild Wind (Early version) and the embryonic Headlong with Brian adding guide vocals.
I would have loved to have seen Face It Alone, Assassin, My Secret Fantasy, Self Made Man and Robbery make this release, but onve again I can but hope that the promoised Anthology set eventually gets released.

Posted by The Sinister Angels realm at 21:00