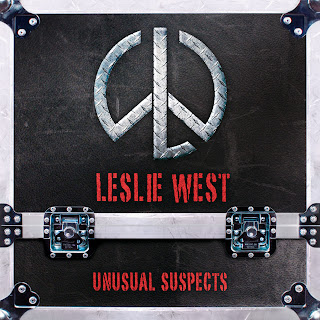 "Legendary guitarist and Mountain founder Leslie West is releasing a brand new solo album entitled "Unusual Suspects" this September, his first since 2006’s 'Blue Me'."
Add Slash, Billy Gibbons, Zakk Wylde and Joe Bonamassa and TOTO singer / guitarist and legendary session musician Steve Lukather to mix and dare I say we're in for something a little special!
"Each of the songs on "Unusual Suspects" has been arranged with the guest musician in mind, which gives them another dimension. West has crafted 12 songs, ranging from the hard rocking “Nothing’s Changed” with Zakk Wylde to the awesome melodic and personal “Legend”.This album also features a couple of cover versions. One of these Leslie has cut before, Willie Dixon’s "Third Degree" which guest musician Joe Bonamassa was so impressed with first time around, he asked Leslie if he’d do it again and let him play on it. Joe also adds some vocals too, and his unmistakable guitar tone, compliments Leslie’s beautifully. The other is a take on Willie Nelson’s "Turn Out The Lights" where Slash and Zakk Wylde join in both acoustically and electrically, the result is nothing short of stunning!

Unusual Suspects is a stunning album, enhanced all the more by the quality of the talent guesting upon it, well worth checking out!


Posted by The Sinister Angels realm at 15:14