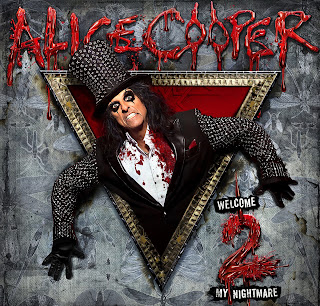 Recorded with longtime collaborator Bob Ezrin, who produced the original multi-platinum "Welcome To My Nightmare" album in 1975, the record picks up right where they left off, with Alice trapped in his own warped mind. "This is Alice's nightmare 35 years later," explains Alice, "Bob and I created this character and we know how to write for him. I play the part but we're not writing for me, we're writing for Alice. We kept the first 'Nightmare' album very personal to us, on this one we found more humor and we were more open. This was our world and we want to present it to the fans. The original album was my first solo album after all those huge hit records with the original band and now that nightmare is exposed, this one can be a little bit more open. The music crosses all sorts of boundaries; we went where the lyrics took us."

Musically, the album ranges far and wide, from trashing disco to garage punk, pop balladry to a rocking number very much in the spirit of THE ROLLING STONES. And then there's the ballad "Something To Remember Me By", described by Alice as "the prettiest song we have ever released."
Glimpses of themes from the original album are intertwined throughout, each track representing a different aspect of Alice's nightmare."

The first thing that I did before listening to this album was to give the original 1975 Welcome To My Nightmare a spin, just so that I could honestly say as to whether Welcome 2 My Nightmare stands up to its predecessor, and not to be comparing it through the eyes of nostalgia.

Welcome 2 My Nightmare, just like its predecessor has a wide range of music styles and themes going on, from the Rolling Stones influenced lead single, I’ll Bite Your Face Off, to the Beatles / Oasis themed Last Man On Earth, to the rock n roll / Ramones groove of Ghouls Gone Wild.
One thing that I have loved when listening to this album is the way that they have interwoven themes, snippets of piano or guitar refrains from the original 1975 masterpiece. All of a sudden, you hear a piano segment from Steven, or a little theme from Only Women Bleed, and all done without it sounding tacky or forced, awesome!

Posted by The Sinister Angels realm at 22:52